Shane Robert Watson (born 17 June 1981) is an Australian cricketer. He is a right-handed batsman and a right-handed fast medium bowler.
Published Date : 1/20/2015
By :PK Mart 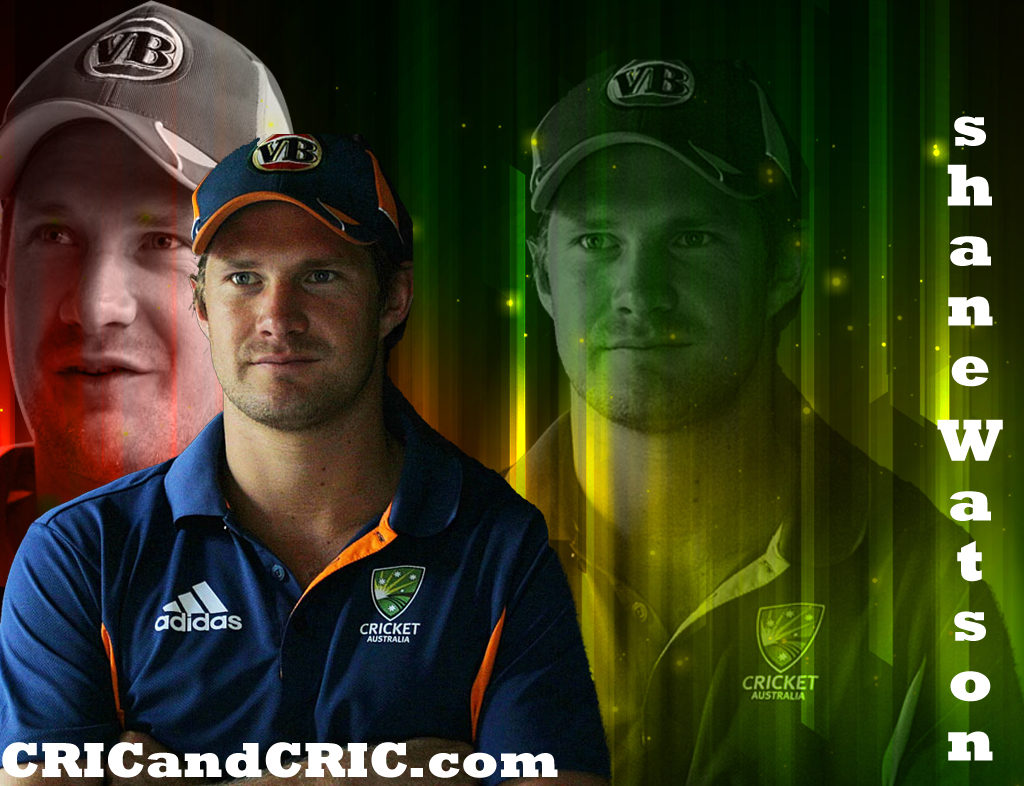 Watson was an AIS Australian Cricket Academy scholarship holder in 2000. He started his first-class cricketing career for Tasmania after leaving his home state of Queensland, but returned to play for his native Queensland as his international career was beginning. He has also played for Hampshire in the English County Championship in 2005. He regards Terry Alderman as one of his mentors.

Watson was selected for his first Australian team in early 2002, being selected to tour South Africa with the Test team after topping the Pura Cup wicket-taking charts for Tasmania, as well as steady middle-order batting performances. Australian captain at the time Steve Waugh stated that Watson would possibly be Australia's first genuine all rounder since Keith Miller and Alan Davidson in the 1950s. Watson expressed joy at being selected in an Australian team with Waugh, whom he cited as his idol. Watson scored an unbeaten century on his debut in a tour match, but did not play in the Tests as the selectors retained the same XI that had swept South Africa 3–0 in the Australian season. Watson did make his ODI debut on tour, ironically replacing Waugh, who was sacked after the team failed to make the ODI finals in the preceding Australian summer. Watson continued as a regular member of the ODI team until he suffered three stress fractures in his back, at the start of 2003, missing the 2003 Cricket World Cup. He was replaced by his Queensland teammate Andrew Symonds, who proceeded to establish his position as the all rounder after scoring 143* and 91* during the tournament. Watson's injury sidelined him until the 2003–04 Australian season, and during his rehabilitation he played most of the season as a batsman, allowing himself to improve his batting skills while his back was still healing. During this time he smashed an unbeaten 300* for his club side, Lindisfarne. Watson returned to regular ODI duty in the 2004–05 season, as a bowling all rounder. He also played in the Third Test against Pakistan as the fifth bowler, in order to allow Australia to play two spinners and three pace bowlers on a dry Sydney Cricket Ground pitch.

In the 2012 ICC World Twenty20, he showed sublime all-round form. In the first match against Ireland at R.Premadasa Stadium in Colombo, he opened the bowling & took 3/26 (wickets of opener-captain William Porterfield, keeper-batsman Niall O'Brien and dangerous Kevin O'Brien) and then scored a breezy 51 from 30 to help his side win the match in 15.1 overs. He was subsequently awarded the Man of the Match. In the next match against West Indies he again opened bowling & batting, took 2/29 from 4 overs(wickets of devastating Chris Gayle & Kieron Pollard) and then scored 41* from 24 balls to win Man of the Match as his side won by 17 runs (by Duckworth-Lewis method). Against India, he was used as 2nd change bowler & took 3/34. It was he who had changed the game by taking the wickets of Yuvraj Singh and opener Irfan Pathan in 11th over. He also dismissed dangerous Suresh Raina in the last over. he followed it up with a 72 from 42 balls (7 sixes & 2 fours), and had an 133-run opening partnership in 13.3 overs with David Warner making a mockery of the target 141. Against South Africa, he took 2/29 (wickets of Hashim Amla and AB de Villiers) and then followed it up with 70 from 47 balls to win 4 consecutive Man of the Match awards and also Man of the series award.

Watson played in the Indian Premier League for the Rajasthan Royals team in the inaugural IPL season. Signed for US $125,000, he performed well with both the bat and the ball scoring four half-centuries to anchor his team to victory in three matches of the tournament and in the semifinals. He also picked up 17 wickets, won four man of the match awards in his first twelve games and also won the Man of the Series award.  On the back of his IPL performance, Watson was subsequently selected to replace Matthew Hayden in the one day series as part of Australia's tour to the West Indies, after Hayden had injured himself during the IPL season. Watson went on to establish himself as an ODI opener in the series.

We are Mainly Manufacturer of Flex Sign Boards, We are also Printing All Kind Of Printing Like Fl...

deals in all kinds of construction chemicals and waterproofing jobs ...

Mohammad Nabi (born 3 March 1985) is a right-handed batsman and off break bowler who plays for and ...