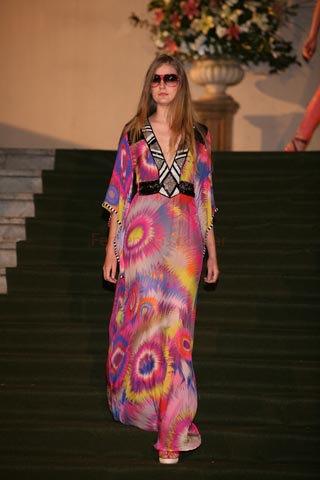 amandreu made his debut as a movie costume designer in 1942, working for leading lady Zully Moreno in a movie named Historia de crímenes ("Crime Story"). He followed that by designing for El muerto falta a la cita ("The Dead One Missed the Appointment"), released in 1944, and in 1947's El misterioso Tío Silas ("The Mysterious Uncle Silas"). Jamandreu, who admitted his homosexuality to his father at age 15, became known among friend and clients not only for his talent, but also for his candor. He began his friendship with Eva Duarte before she married populist leader Juan Perón in 1945. Their relationship was initially of a business nature, and Jamandreu began a long series of designs for the actress and, later, First Lady. He became her confidant, and vice versa. His friendship with Eva Perón was dramatized in Juan Carlos Desanzo's Eva Perón: The True Story (1996); he was portrayed by actor Horacio Roca.[3] According to the film, Jamandreu admitted to Ms. Perón that he was homosexual, telling her that "being homosexual in Argentina is just like being poor." Following a relative absence from Argentine cinema credits during the 1950s, Jamandreu became more active as film fashion designer during the 1960s, when he worked in six films. Between 1969 and 1995, he retired from designing clothes for film, but he debuted as an actor in 1980, participating in a movie named Una Viuda descocada ("A Crazy Widow"). In 1986, he acted in Soy paciente ("I'm Patient"), but that film was never released because the producers could not finish recording it.

Werner Baldessarini (born 23 January 1945, in Kufstein in Tyrol) is an Austrian fashion designer an...

Amir Slama is a Brazilian-born fashion designer [1] [1]. He was the designer, stylist and owner of ...

Isilda Pelicano (born in 1949) is a Portuguese fashion designer based in Lisbon....

Attn: Purchase Manager Respected Sir, We are one of the establish company specializing in, All Type...

We are Skill Trainers providing Skill Training and Short Courses in Multiple Fields to all people. ...

Sometime you are only concentrating on main dish and don't bother the side dishes. You can make the...