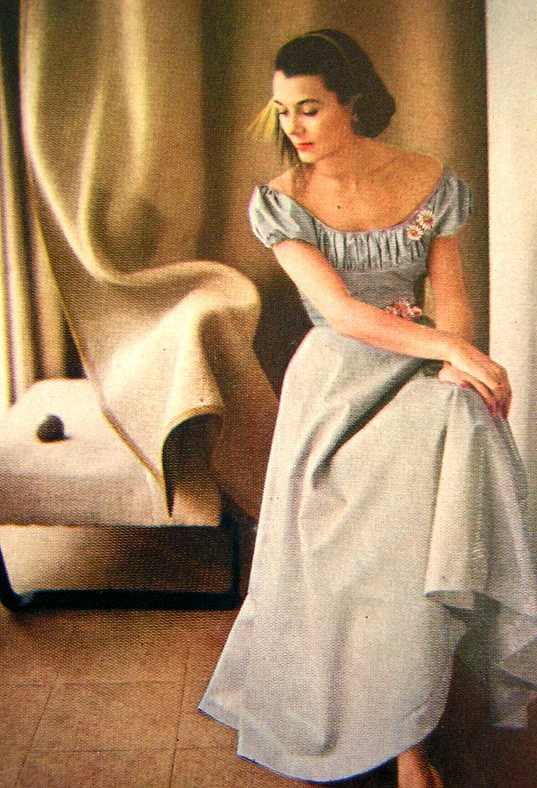 Nettie Rosenstein (1890 - March 13, 1980) was an American fashion designer, based in New York between c.1913 and 1975. She was particularly renowned for her little black dresses and costume jewelry.

Born Nettie Rosenscrans in Salzburg, Austria in 1890, she and her family migrated to America in the 1890s and settled in Harlem, New York. Her family was Jewish. In 1913 Nettie married Saul Rosenstein, who ran a women's underwear business, and began dressmaking as a home business.  By 1921, she owned an establishment with 50 workers in Manhattan, New York.  After being approached by the I. Magnin department store in 1919, she began wholesaling.

In the 1920s American fashion business, imported fashions by named French couturiers were considered the best to be had. At this time Rosenstein's designs were sold by stores under their own labels, though purchasers were told that the dresses were in fact by Nettie Rosenstein. Through word of mouth Rosenstein earned name recognition and her own-name label became a valuable commodity. Her clothes were retailed around America, but only one store in each city was permitted to carry fashions bearing Rosenstein's label.  In 1927 Rosenstein tried an early retirement, but resumed designing in 1931, when she reopened on West 47th Street in collaboration with her sister-in-law, Eva Rosenstein and Charles Gumprecht.  In 1937, Rosenstein was described by Life Magazine as one of the most highly regarded American designers.  She was one of the first recipients of the Neiman Marcus Fashion Award on its launch in 1938. In 1940, Rosenstein clothing was sold out of 92 shops and department stores across the USA, at prices ranging from $98 to $500. Whilst these prices were beyond the range of most consumers, Rosenstein's designs were so widely copied that she still influenced the average American woman's wardrobe.  One such design was the "little black dress" designed to go from day to evening with low-cut evening necklines combined with daywear silhouettes and materials.  Her designs also included printed dresses with gloves to match, and she was also known for her accessories and striking costume jewelry. After Nettie Rosenstein retired from the fashion industry, her name was carried on by long time business partner and Coty Award Winner, Sol L. Klein, who designed and manufactured costume jewelry and handbags under the name Nettie Rosenstein Accessories. Sol L. Klein retired from the accessories business in 1975. announced her second retirement in March 1942, inspiring a tribute in TIME Magazine. However, this retirement did not last long, as she resumed fashion design a few years later, winning a Coty Award in 1947. She was the designer responsible for First Lady Mamie Eisenhower's dress commissioned by Neiman Marcus for the 1953 Inauguration Ball.

Lars Nilsson (born 1966 in Stockholm, Sweden) is a fashion designer who has worked with several maj...

We are introducing ourselves as one of the oldest and pioneers in launching & manufacturing water b...

Kp never let its customer to get jaded from same recipes that’s is why we keep on bringing variati...