Mohammad Hafeez ( born 17 October 1980 in Sargodha, Punjab) is a Pakistani cricket player and the former captain of Pakistan national cricket team in the T20 format.
Published Date : 1/15/2015
By :PK Mart 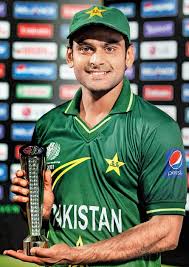 Mohammad Hafeez also known as professor and he played in bhera and was one of several young all-rounders whom the Pakistani cricket team turned to in order to revitalize their side after their poor display in 2003 World Cup where Pakistan was out from first round. His form with both bat and ball was inconsistent and in late 2003 he was dropped from the Test squad and subsequently from the ODI side. Following strong domestic performances, as well as display of good form for the Pakistan A side, he remained on the fringes of a recall in 2004. Hafeez returned to the ODI side in 2005 and despite poor form with the bat, his bowling performances were impressive. In the 2006 series held in Australia, Hafeez smashed his first century for Pakistan. With Pakistan struggling to find a solid opening pair for the Test side, he was recalled for the tour of England. His return to Test cricket was made at The Oval where he scored a fluent 95. Subsequently, Hafeez retained his place in the Test squad for Pakistan's home series against the West Indies in November of that year. After getting out early despite good starts in the first two Tests, he went on to score his second Test century in the third Test in Karachi. However his form remained inconsistent and he was unable to command a regular place in either the Test or ODI side over the next 5 years.

In 2010 he was recalled for the third ICC World Twenty20 squad. His form was poor scoring only 39 runs and taking only 2 wickets in 6 matches. However he was subsequently selected for the T20Is and the ODIs on Pakistan's 2010 tour of England. He was the second highest Pakistani run scorer in the ODI series producing some solid opening partnerships with Kamran Akmal. Following this good form he was included in the squad that was selected to play South Africa in the UAE and he replaced disgraced skipper Salman Butt as an opening batsman in both Tests, achieving a batting average 32.50. He played in all 5 ODI matches ending up as the top run scorer and he also topped the bowling averages for the series. At the end of 2010 he was also selected for the party that would tour New Zealand and the West Indies and this resulted in him establishing himself as a regular in the Test, ODI and T20 teams. In 2011 he won an amazing 10 Man-of-the-Match awards in all forms of international cricket and became only the third player (after Sanath Jayasuriya and Jacques Kallis) to score 1000 runs and take 30 wickets in ODI matches within a calendar year. Against India on 18 March 2012 in Bangladesh at Shere Bangla National Stadium, Mirpur at the 2012 Asia Cup, he scored 105 off 113 balls and was involved in a 224 run partnership with Nasir Jamshed, which is the best opening partnership for Pakistan against India in one day internationals. They eclipsed Aamer Sohail and Saeed Anwar's record of 144 runs which was made in 1996.[4] He made his 4th ODI century in March 2012 against Bangladesh at Dhaka. He also made his highest test score of 196 against Sri Lanka in the second Test at Colombo in June 2012. He is currently (2012) ranked number two in the ICC ODI rankings for both bowlers and all-rounders. In December 2012, during the tour of Pakistani cricket team in India in 2012–13, he came across as a very different and aggressive batsman and scored so brilliantly and briskely and helped Pakistan to win the first T20I and 2nd ODI with his heroics of brilliant batting and nearly chasing a mountain high target of 191 in the second T20I. His scores were 61 and 55 in first and second T20I respectively and scored 76 runs in the 2nd ODI and sharing an opening stand of 141 with Nasir Jamshed and also bowled brilliantly as always economically to help Pakistan win their first ODI series in India since 7 years. He is now considered to be the main allrounder of Pakistan Cricket team. He had a great series against Sri Lanka in Dec 2013, where he scored 122 in the first match, 140* in the third and 113* in the fourth match. Thus he became, the second batsman after Zaheer Abbas to score 3 centuries in an ODI series.

Moeen Munir Ali (born 18 June 1987) is an English cricketer of Pakistani descent. He is a left-hand...

We are feeling enormously happy, while introducing our company as The Best Budgeted & Secured Accom...

Khalid Amin & Sons is one of the leading professional manufacturer of corrugated box converting mac...

we are connecting last 12 year in this business and sale the all type of pet bottle scrap all color...

Designed for small business the Vostro 5460 laptop is packed with the features you need to stay con...

Laurent Lokoli (born 18 October 1994) is a French tennis player. As a wildcard into qualifying, he ...