Gary Simon Ballance (born 22 November 1989)[1] is an English first-class cricketer. He is a left-handed batsman and a leg break bowler, who currently plays for Yorkshire County Cricket Club and England. He was born in Harare, Zimbabwe. He normally fields at slip.
Published Date : 1/20/2015
By :PK Mart 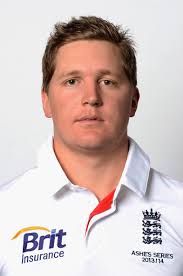 Ballance was born and raised in Zimbabwe, where his parents were tobacco farmers. After representing Zimbabwe in cricket at various age levels, he moved to England in 2006. He attended Harrow School for 2 years, where he was in the same team as Sam Northeast. Playing for Harrow, he scored a century against Eton College at Lord's.

Following impressive performances for Yorkshire and the England Lions, Gary Ballance debuted for England against Ireland, in Dublin, on 3 September 2013 but failed to impress with the bat after getting caught behind without having scored a run.

Ballance was selected for the England squad for the 2013-14 Ashes series. He was selected to play in the 5th Test ahead of fellow Yorkshire team mate Joe Root. He became the 659th player to play for England and was handed his cap by captain Alastair Cook. He was one of three players, the others being Scott Borthwick and Boyd Rankin, to make their debuts in the 5th Test. In the first innings he made 18 runs after coming in with the score at 17/4 and helped England to 155 all out. Test Match Special commentator Geoffrey Boycott acknowledged that Ballance was incredibly unlucky to be dismissed, receiving a corker that pitched in the footmarks. In the second innings he made 7 runs finishing the series with 25 runs. Ballance's next call-up was against Australia during the England tour of Australia. In the 1st ODI, at the MCG, Ballance top scored for England, making 79 runs off 96 balls. However this was not enough to help England win as Australia cruised to a 6 wicket win. Ballance kept his place for the 2nd ODI however he managed only 9 runs off 19 balls before being stumped by Brad Haddin. In the 3rd ODI Ballance batted at number 4 and made 26 runs off 42 balls. He retained his place for the 4th ODI and made 18 runs off 30 balls before being caught. Ballance was left out of the 5th ODI and was replaced by Joe Root.

Ballance featured in the 1st ODI against Sri Lanka, he top scored with 64 runs in England's win. In the 2nd ODI he only made 5 runs in England's 99 run innings. He played in the 3rd ODI however he was not needed in England's 10 wicket win. Ballance was included in the squad for both of the test matches against Sri Lanka, batting at number three as a replacement for Jonathan Trott who had stepped away from cricket during the 2013–14 Ashes. In the first test at Lord's, he made 27 runs in the first innings before reaching his maiden Test hundred in just his second Test match in the second innings, ending not out on 104. He was one of 4 centurions in the series for England, the others being Moeen Ali, Sam Robson and Joe Root, who made a double hundred. Ballance had mixed fortunes in the second test, scoring 74 in the first innings before being dismissed for a golden duck in the second, finishing the series with 205 runs.

In the first test against India, Ballance continued his good form with the bat by making 71 in the first innings as the match ended in a draw. Ballance hit his second Test ton on 18 July 2014 against India. He scored 110 before being caught behind off Bhuvneshwar Kumar, bringing England back into the match after struggling on 113/4. Ballance became only the third England player to score hundreds in his first two Lord's Tests, after Andrew Strauss and Jonathan Trott. Ballance scored an impressive 156 in the first innings of the third test but was unfortunate to be given out through a poor decision by the umpire. He was again unlucky when, on 38 in the second innings, he was given out caught when the ball touched his trouser.  In the fourth match of the series he was only required to bat once, making 37 as England won to go 2-1 up in the series. He made 64 in the final test to help England win the game and the series 3-1. He played in the fourth ODI between the two sides, but could only make seven.

We would like to take the opportunity to introduce ourselves as one of the progressive company in t...