Alfred Sung (born 14 June 1948) is a Chinese-born Canadian fashion designer, producing apparel, fragrance, accessories and home fashions for women and men. He was born in Shanghai and raised in Hong Kong.
Published Date : 2/11/2015
By :PK Mart

Alfred Sung (born 14 June 1948) is a Chinese-born Canadian fashion designer, producing apparel, fragrance, accessories and home fashions for women and men. He was born in Shanghai and raised in Hong Kong. Sung is the brother of late Hong Kong actress Lydia Shum He is also a founder of Club Monaco, a mid-priced, high-end casual clothing retailer..

Sung aspired to become a fine artist contrary to his parents' wishes that he pursue a traditional profession. In time, his father compromised and agreed to send him to Paris where he studied couture at the notable Cambre Syndicale de la Couture Parisienne. After graduating with first-place honours, Sung moved to New York City to study at the Parsons School of Design. Upon completion, he began the task of honing his talent while working as an assistant designer for a Seventh Avenue dress manufacturer.//

In 1972, Alfred Sung moved to Canada. His next step was designing for a sportswear manufacturer in Toronto's garment district. After using his fashion illustration skills to supplement his income, Sung opened a tiny shop called Moon initially located on Carlton St. just east of Sherbourne in Toronto's Cabbagetown area around 1977. His loose fitting and comfortable desert colour designs were a major contrast to the black leather and skinny jeans of the prevailing Punk scene. In 1980, Sung joined forces with Saul and Joseph Mimran to create Monaco Group Inc., the corporate entity that would develop the Alfred Sung brand and the ready-to-wear collection directed to working women. Within months, the Alfred Sung brand appeared in major department and specialty stores across Canada. In 1981, the Alfred Sung label was launched in the United States through Saks Fifth Avenue, later appearing in Macy's, Nordstrom, Neiman Marcus and Bergdorf Goodman. That same year, Sung opened his first freestanding store in Toronto's Hazelton Lanes. In 1983, Canada's national news magazine, MacLean's, proclaimed Alfred Sung as Canada's "King of Fashion."[citation needed] In 1986, with the launch of Parfums Alfred Sung, the Sung trademark its profile by becoming a fragrance brand. Sung by Alfred Sung, the first ladies' perfume launched in 1986, was followed by Shi Alfred Sung in 2001 and Alfred Sung Paradise in 2003. In 2005 a new signature fragrance, Jewel Alfred Sung was launched...

In 1985, Canadian Joe Mimran, Saul Mimran and Alfred Sung opened the first store in Toronto on Queen Street West. This store, which exists today, originally included a cafe below the sales floor. The first US store opened in Santa Monica in 1989. Until 1999, Club Monaco was a Canadian company and was based at Bloor Street West and Avenue Road in Toronto. It is now owned and operated by Polo Ralph Lauren, which acquired Club Monaco in 1999. Polo has allowed Club Monaco to exist as an independent entity within the group and has downplayed its ownership of the brand. Luxottica began distributing Club Monaco prescription frames and sunglasses in its retail outlets in 2007... 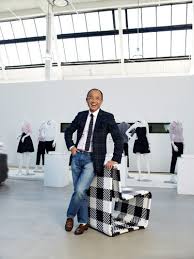 Yves Castaldi (born April 10, 1952) is a French fashion designer and entrepreneur. He took his firs...

Jenny Kee (born 24 January 1947) is an Australian fashion designer. She was born in Bondi to a Cant...

Claire Fitzsimmons, better known as Ms. Fitz,[1] is an Australian stylist and artist living in New ...

We are manufacturer of water treatment chemicals and House Hold Chemicals. We are present in all ov...

We are leading manufacturer, converter and supplier of quality plastic packaging materials. Our pr...

Hyderabadi Chicken Biryani is a nawabi and aromatic preparation of basmati rice and chicken with th...